The year 2020 marked the golden jubilee of the presence of Anton (‘Ton’) Tromp osa in what since
1 May 1963 has become named as the Irian Barat Province of Indonesia. This fifty-year ministerial milestone for Anton locally what was described as a Golden Year, and so it proved to be. The Austral-asian Province Newsletter is indebted to Anton because, throughout the past fifteen years, he has continuously sent us news and images of the Order’s ministry in West Papua, whose Augustinians are our brothers living nearest to Australia. A special thanks to relatives in the Netherlands of deceased Dutch Augustinians who for this Newsletter located in their family photo albums the photos included here of West Papuan ministry decades ago. [ Ed ] 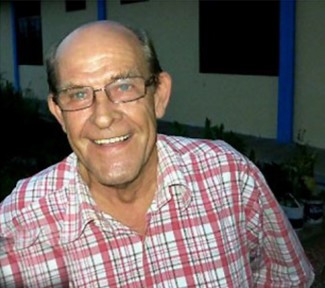 My appointment to the Dutch Augustinian Mission in Papua came as no surprise, and I accepted it as an inviting adventure. Two years before my priestly ordination, it had been decided that I would be going there, and my seminary education programme was then expanded to include cultural anthropology, language study, a medical course, etc.

For my enculturation in West Papua, I read a lot and listened to experienced missionaries. I tried not to have prejudices, to keep an open mind, just to be ‘present’ and to take everything in. More listening than talking, and more asking than answering. Upon my arrival there, I was only twenty-four years of age; therefore it was agreed between the Provincial and Bishop Piet van Diepen osa (Diocese of Manokwari) that, after three to four years in Papua, I would take up some advanced studies. It turned out to be a master’s degree in sociology at the Asian Social Institute in Manila, Philippines.

Although located in a remote and isolated part of the world, the West Papuan indigenous people have lived and maintained themselves adequately in these tropical forests for hundreds of years. Amazing. So for us missionaries, the point was to get behind this miracle, always wondering why something was felt, done and expressed as it was done. Nothing should be a priori ‘strange’. When you live in an isolated village, in a rural area, with two-way radio for official business only, poor public radio reception (Dutch broadcasting company), and with no foreigners around, one had no choice; adjustment goes smoothly. The new language I had to learn was Bahasa Indonesian. Our dialogues were usually at a ‘low level’ about daily life, bride prices, crimes, livestock and farming, and not about the world scene, politics, or theological discourse. 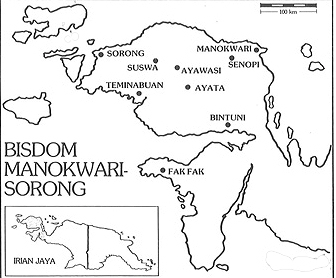 When I arrived, it was straight to a jungle parish for me - three and a half years in 1970-1973 as the assistant parish priest in Bintuni, at the MacCluer Gulf, the southern part of the so-called Bird’s Head on any map of Indonesia. The pastor there was Fr Ben (Bernardus) Noords osa, the only European in the area. He already had been there for eight years. It was unfortunate that Bintuni in those years was the only parish/mission in the diocese that had no Religious Sisters. Bintuni was then a town of approximately 3,000 people (now 15,000). As outstations, there were about thirty villages, twenty of them Catholic, with approximately another 15,000 people. It is a coastal town at the mouth of the Bintuni River near the Bintuni Bay or MacCluer Gulf. From Bintuni we had to minister to about twenty villages located along the rivers of the north and south coast of Bintuni Bay. Some villages could only be reached by boat, and others only by trekking through the jungle. The people had dug-out wooden canoes (see photo). The Church had its own motorboat with a pair of thirty-horsepower engines, and it could carry about fifty tons of freight. The government, police and military had no boat; they had to ask for assistance from the Church.

A coastal ship from Sorong would stop by about once every two months. The Catholic dioceses in West Papua have their own light aircraft, in those years three or four Cessna 185s, operating as Associated Mission Aviation (AMA). A Cessna aircraft came to Bintuni once or twice every two months. The priest had to mow the grass airstrip (800 by 40 meters) every two or three weeks.

There was no electricity service in Bintuni. The church compound had its own generator; besides that, two Chinese stores had the only other generators in the district. Nor was there a public water supply; you either had to dig your own well, catch rain water, or else scoop drinking water from the nearby river, like every village did. The local diet: the staple food was sago (the starch of the sago palm tree) and sweet potatoes, yams and cassava; we had plenty of fish, and once in a while pork or deer. Rice was imported, but not enough for us to be able to eat some every day. Everything was very basic, e.g., once we had no sugar for a couple of months, but we had sticks of sugar cane.

We tried to visit every village at least once every three months. Salaries for the teachers (also to those teachers in government schools) were delivered by the parish priest during his visits to the villages. The priest also brought supplies for those teacher-families and catechists (whatever you can think of, from iron machetes and axes to underwear, from candies to fishing hooks, etc). Part of the pas-toral work consisted of trading, dealing with food supplies, construction and maintenance of engines and buildings. Part of the time was spent on communication, walking in the jungle, traveling by boat, cutting the grass of the airstrip, repairing the mower and the generator, dealing for diesel-oil and kerosene (often delivered by aircraft).

For me when new to West Papua, there was not much sense of isolation; on the contrary, no solitude or privacy at all, always surrounded by people. The children accompanied you when you went to take a bath in the river, the Bintuni adults would in the evenings come to the rectory where there was electric lighting, just to sit and talk, to look at the pictures in old magazines, to play cards, etc. Even when Fr Ben Noords and I were the only two persons there, we spoke Indonesian together. So for years no Dutch was to be heard (except during our visits to the diocesan office in the town of Manokwari at the most once a year). Every parish also had a small boarding school (in Bintuni, (then about forty kids), so those kids studied in the school located in the parish’s backyard.

There was no other realistic course of action for a foreign missionary than to adjust, to do what others previously had done for years. No reason for innovation! There was a big gap between the modern post Vatican II Dutch Church and this remote traditional jungle Church. (What missionary had heard of the changes in the ecclesial world? Who kept reading theology? Only one or two, besides our bishop, Piet van Diepen osa, who had attended the later Vatican Council sessions). Keep in good health as far as possible, because of always the presence of malaria, tropical wounds, etc., be down to earth, be practical, unite people of the different tribes and migrants from other Indonesian islands, pay attention to village community development, health care and schooling. Education is the way forward. Respect the local culture. Speak the language as well as possible. Come to know Nature.

The local people are very religious. Allah is nearby. Death is part of life. They have a cosmological outlook, where nature and culture are not separated, where ‘man’ is ‘part of nature’ and not the boss mastering nature. Solidarity with the sorrowful and the people suffering is evident. The rites of passage (birth, marriage, death) are witnessed by everybody (no need for sexual education later on, ha, ha!!).

The community, the family, is more important than the individual. Tragedy occurs due to ‘bad spirits’, to ‘Satan’. How do you dismiss or attack them? No worries about not being safeguarded in the hands of God. Man is co-creator and co-salvator. The world-hereafter is still ‘our’ world (with the deceased omnipresent).

People in Bintuni have experienced some European presence since Dutch colonial administrators had first moved through the area in 1925. When I arrived there eight years after Fr Ben Noords osa, he said he had been made to feel very welcome and at home; priests were the people’s links to the wider world, and were agents in uniting the tribes. They shared with us everything they had, and were proud to be Catholic. A few villagers were polygamous, let it be…

The Indonesian military presence after 1969 was always a burden and a threat. Each person or family was Catholic, Protestant or Muslim. Catholic village leaders held a Sunday service in the absence of a priest. Fr Paul Trorba osa, the secondever Papuan Augustinian priest, now aged in his sixties, came from Bintuni. So too was Fr Lewi Ibori osa, now in his fifties and serving as Vicar General of the Diocese of Manokwari-Sorong. There also have been a number of Religious Sisters from Bintuni. 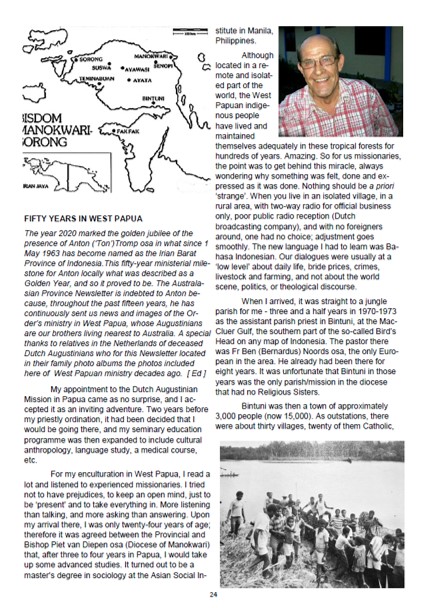 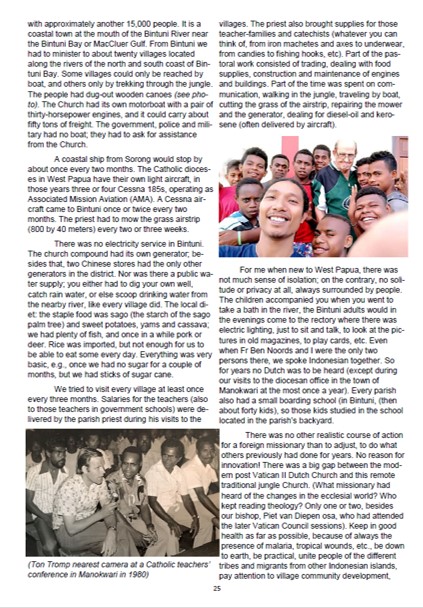 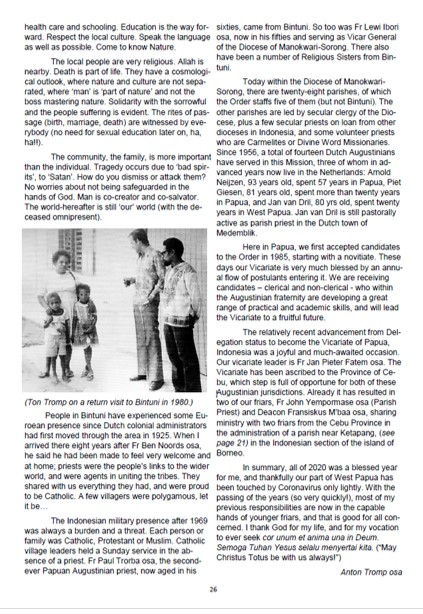 Today within the Diocese of Manokwari-Sorong, there are twentyeight parishes, of which the Order staffs five of them (but not Bintuni). The other parishes are led by secular clergy of the Diocese, plus a few secular priests on loan from other dioceses in Indonesia, and some volunteer priests who are Carmelites or Divine Word Missionaries. Since 1956, a total of fourteen Dutch Augustinians have served in this Mission, three of whom in advanced years now live in the Netherlands: Arnold Neijzen, 93 years old, spent 57 years in Papua, Piet Giesen, 81 years old, spent more than twenty years in Papua, and Jan van Dril, 80 yrs old, spent twenty years in West Papua. Jan van Dril is still pastorally active as parish priest in the Dutch town of Medemblik.

Here in Papua, we first accepted candidates to the Order in 1985, starting with a novitiate. These days our Vicariate is very much blessed by an annual flow of postulants entering it. We are receiving candidates – clerical and non-clerical - who within the Augustinian fraternity are developing a great range of practical and academic skills, and will lead the Vicariate to a fruitful future.

The relatively recent advancement from Delegation status to become the Vicariate of Papua, Indonesia was a joyful and much-awaited occasion. Our vicariate leader is Fr Jan Pieter Fatem osa. The Vicariate has been ascribed to the Province of Cebu, which step is full of opportune for both of these Augustinian jurisdictions. Already it has resulted in two of our friars, Fr John Yempormase osa (Parish Priest) and Deacon Fransiskus M’baa osa, sharing ministry with two friars from the Cebu Province in the administration of a parish near Ketapang, (see page 21) in the Indonesian section of the island of Borneo.

In summary, all of 2020 was a blessed year for me, and thankfully our part of West Papua has been touched by Coronavirus only lightly. With the passing of the years (so very quickly!), most of my previous responsibilities are now in the capable hands of younger friars, and that is good for all concerned. I thank God for my life, and for my vocation to ever seek cor unum et anima una in Deum. Semoga Tuhan Yesus selalu menyertai kita. (“May Christus Totus be with us always!”) 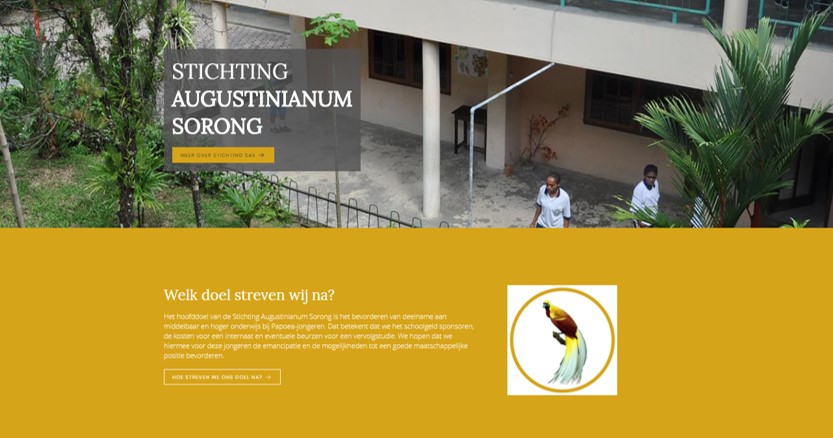 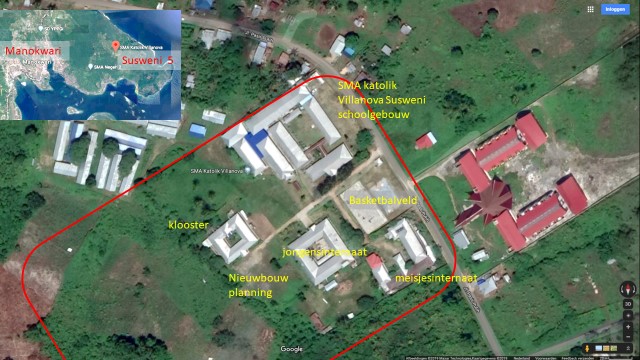 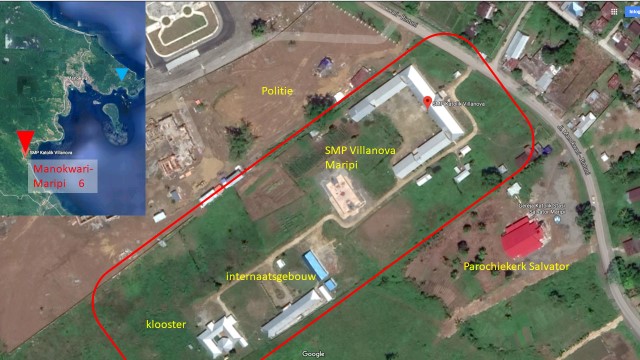 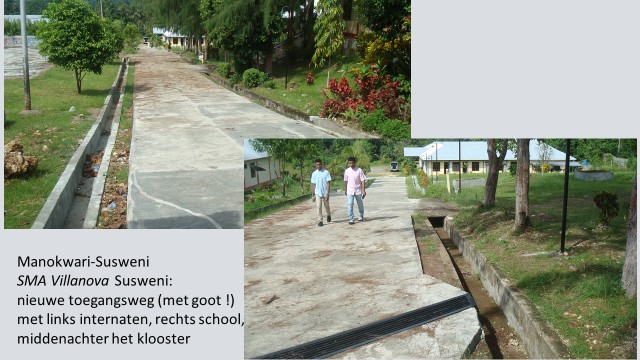 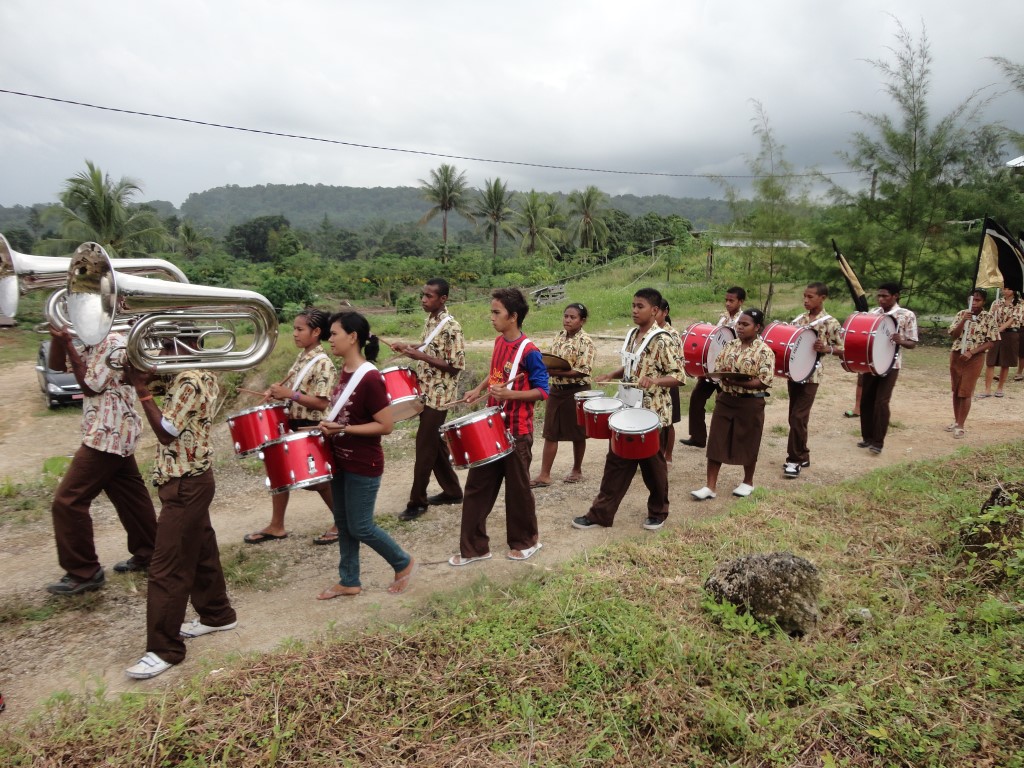 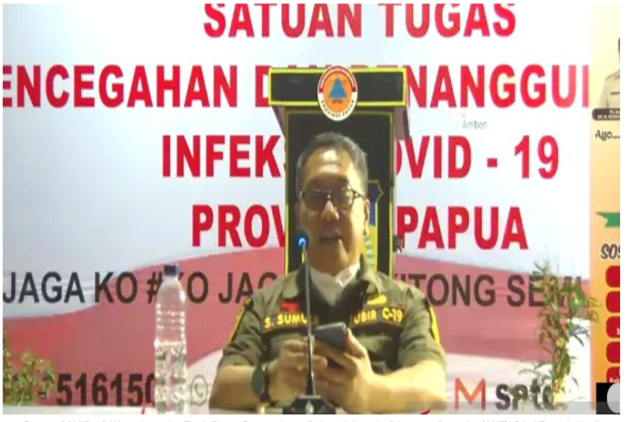 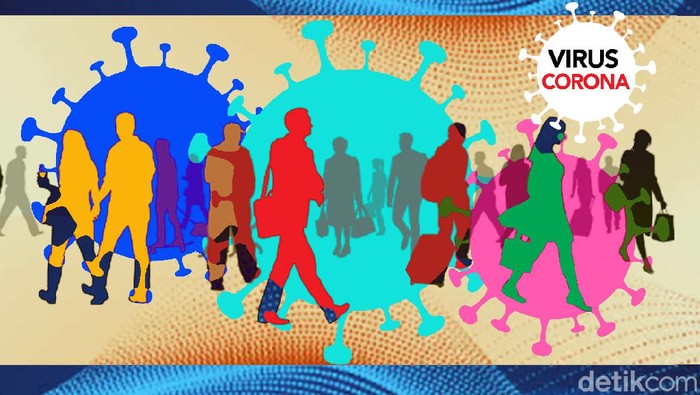 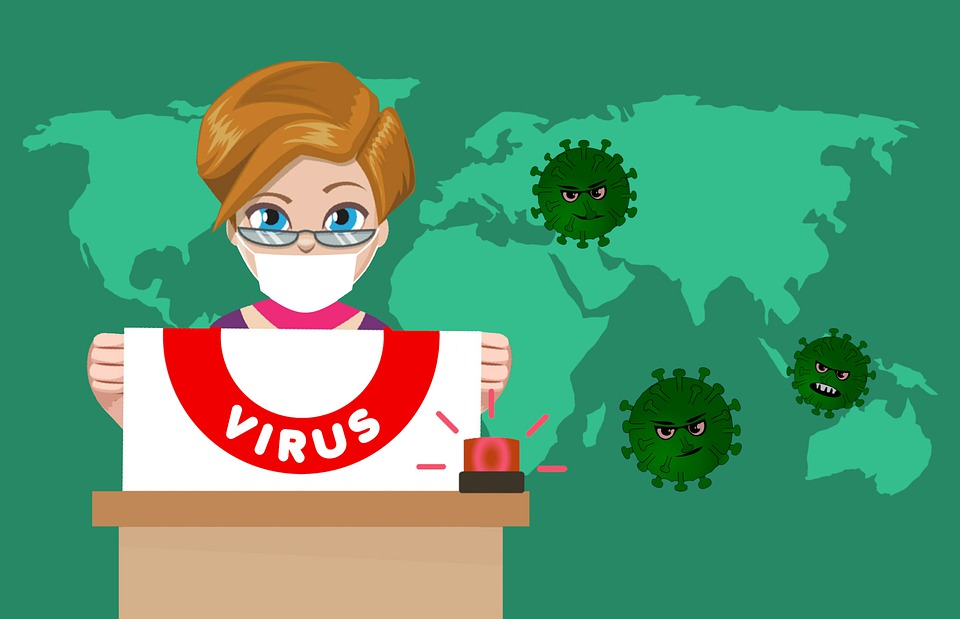 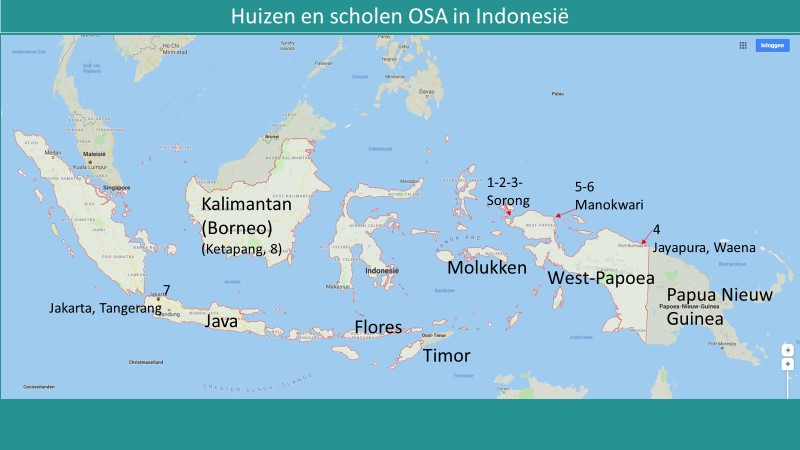 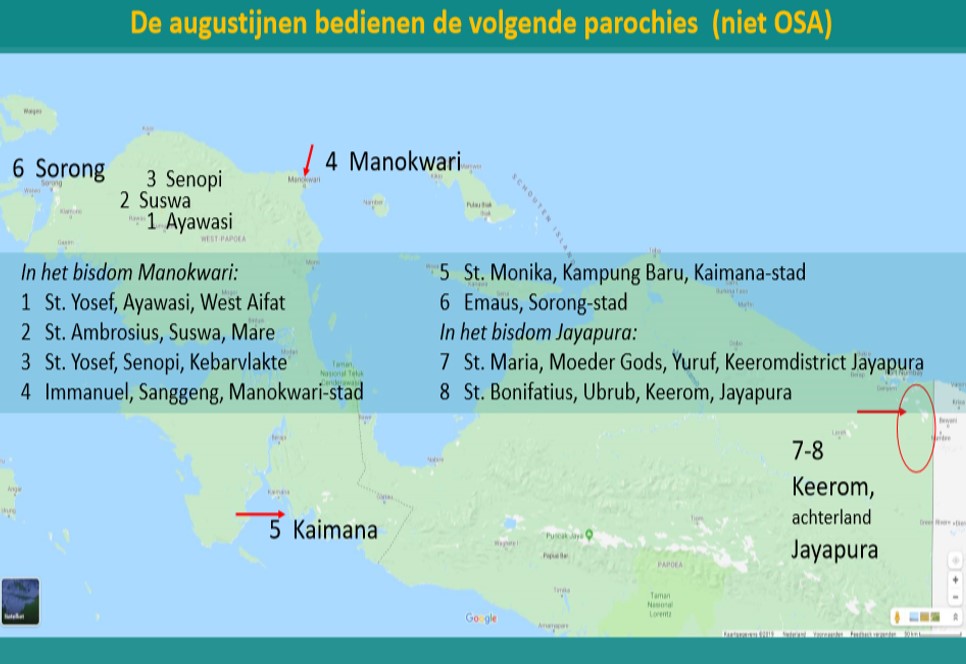 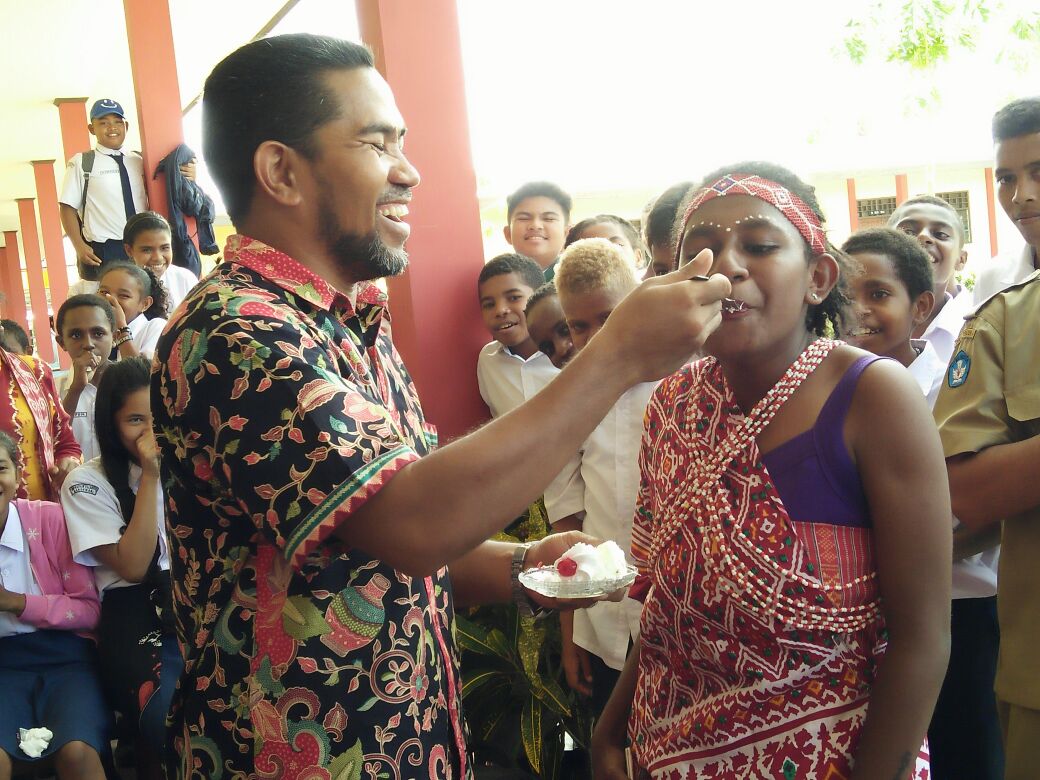 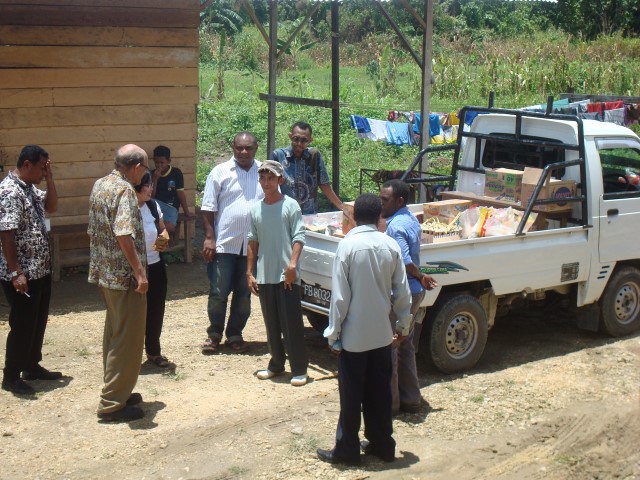 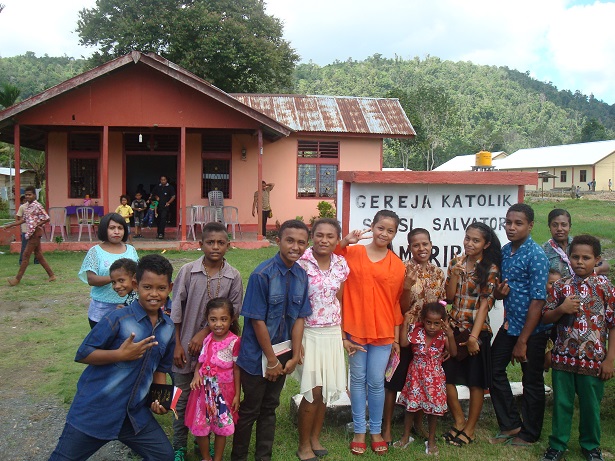 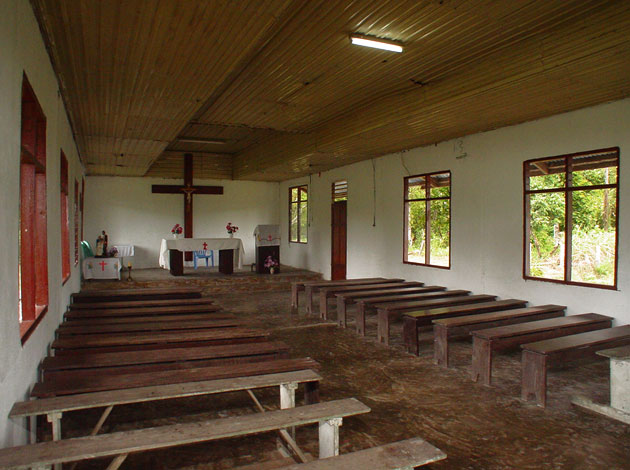